Is orange a hybrid of grapefruit and orange? 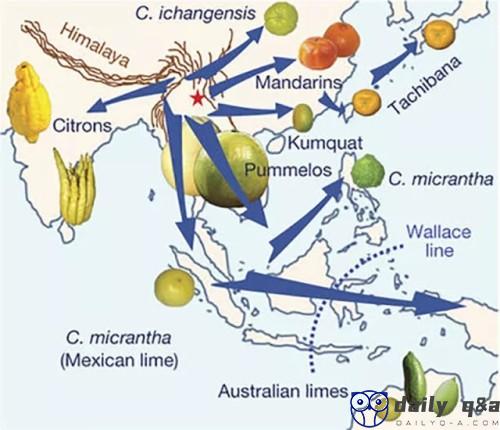 As for the main sources of citrus fruits, the basic framework of "yusanjia" has not changed, but at least 10 species have been identified. These 10 species are as follows:

However, the more important work of this study is to reconstruct the evolutionary history of Citrus more accurately.

Genome wide data and fossil records suggest that citrus probably originated in the southeastern part of the Himalayas in the late Miocene about 8 million years ago, specifically from Assam state in India to the East through northern Myanmar to the west of Yunnan Province in China. During this period, the earth's climate just experienced dramatic changes, from warm and wet to cold dry, and the monsoon activity in Southeast Asia was also significantly weakened. Citrus ancestors seized the opportunity of climate change and began to spread around, differentiating new species as they migrated.

Among all kinds of citrus, the East and South are the most successful. The East oriented wide peel orange has spread to Japan and South Korea through South China and Taiwan, becoming the unique subspecies of C. reticulata subsp The south branch crossed the famous "Wallace line" (between Kalimantan and Sulawesi) through the Malay Peninsula, and reached New Guinea, northern Australia and many Pacific Islands, where it evolved more species (such as the famous orange C. australasica) and became a valuable germplasm resource for citrus breeding.